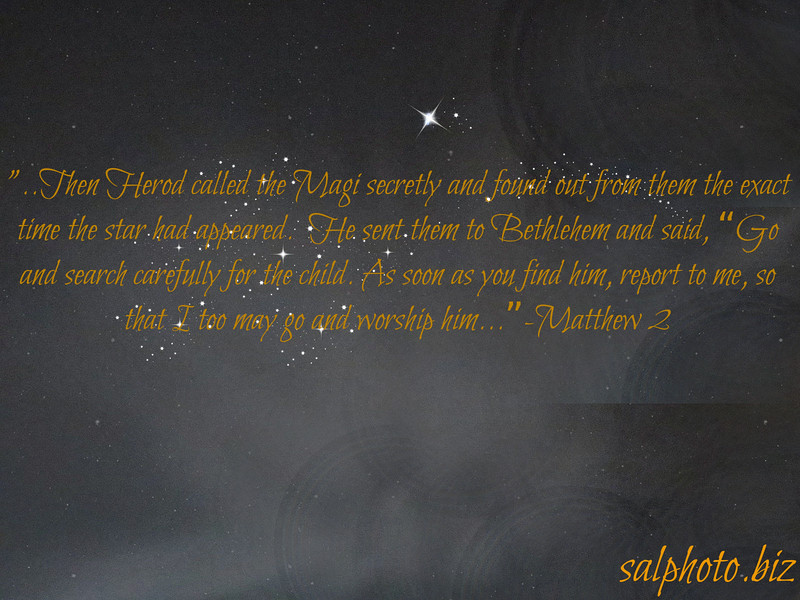 The Magi Visit the Messiah
2 After Jesus was born in Bethlehem in Judea, during the time of King Herod, Magi[a] from the east came to Jerusalem 2 and asked, “Where is the one who has been born king of the Jews? We saw his star when it rose and have come to worship him.”

3 When King Herod heard this he was disturbed, and all Jerusalem with him. 4 When he had called together all the people’s chief priests and teachers of the law, he asked them where the Messiah was to be born. 5 “In Bethlehem in Judea,” they replied, “for this is what the prophet has written:

6 “‘But you, Bethlehem, in the land of Judah,
are by no means least among the rulers of Judah;
for out of you will come a ruler
who will shepherd my people Israel.’[b]”
7 Then Herod called the Magi secretly and found out from them the exact time the star had appeared. 8 He sent them to Bethlehem and said, “Go and search carefully for the child. As soon as you find him, report to me, so that I too may go and worship him.”

9 After they had heard the king, they went on their way, and the star they had seen when it rose went ahead of them until it stopped over the place where the child was. 10 When they saw the star, they were overjoyed. 11 On coming to the house, they saw the child with his mother Mary, and they bowed down and worshiped him. Then they opened their treasures and presented him with gifts of gold, frankincense and myrrh. 12 And having been warned in a dream not to go back to Herod, they returned to their country by another route.

What was the Star of Bethlehem?
http://www.christiananswers.net/q-eden/edn-c018.html

Three wisemen.Matthew 2:1-9: Now after Jesus was born in Bethlehem of Judea in the days of Herod the king, behold, wise men from the East came to Jerusalem, saying, "Where is He who has been born King of the Jews? For we have seen His star in the East and have come to worship Him." When Herod the king heard this, he was troubled, and all Jerusalem with him. And when he had gathered all the chief priests and scribes of the people together, he inquired of them where the Christ was to be born. So they said to him, "In Bethlehem of Judea, for thus it is written by the prophet: 'But you, Bethlehem, in the land of Judah, are not the least among the rulers of Judah; For out of you shall come a Ruler who will shepherd my people Israel.'" Then Herod, when he had secretly called the wise men, determined from them what time the star appeared. And he sent them to Bethlehem and said, "Go and search carefully for the young Child, and when you have found Him, bring back word to me, that I may come and worship Him also." When they heard the king, they departed; and behold, the star which they had seen in the East went before them, till it came and stood over where the young Child was. (New King James Version)

There have been many attempts to explain the Christmas Star scientifically, and three ideas will be mentioned here.

Some scholars think this “star” was a comet, an object traditionally connected with important events in history, such as the birth of kings. However, records of comet sightings do not match up with the Lord's birth. For example, Halley's Comet was present in 11 B.C., but the first Christmas took place around 5 to 7 B.C.

Others believe that the Star of Bethlehem was a conjunction, or gathering of planets in the night sky. Since planets orbit the sun at different speeds and distances, they occasionally seem to approach each other closely. Johannes Kepler (1571-1630) preferred this view. However, multiple planets do not look like a single light source, as described in Scripture. Also, planet alignments are rather frequent and therefore not that unusual. There was a conjunction of Jupiter and Saturn in 6 B.C., but an even closer gathering in 66 B.C., much too early!

Finally, an exploding star, or supernova, has been proposed to explain the Christmas Star. Some stars are unstable and explode in this way with a bright blaze. However, historical records do not indicate a supernova at the time of the Lord's birth.

All three explanations for the Star of Bethlehem fall short of the nativity story as predicted in Numbers 24:17 and recorded in Matthew 2:1-12.